Honda has announced its 2017 Pilot will be available with CarPlay and Android Auto in models EX and above in the United States. The software platforms will be built into an improved 8-inch touchscreen with a new anti-fingerprint coating. 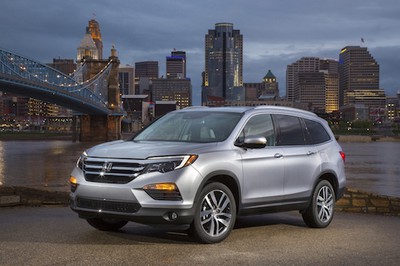 The three-row SUV is the latest Honda vehicle to support CarPlay after the 2016 and later Accord, 2016 and later Civic, 2016 Clarity Fuel Cell Sedan, 2017 Ridgeline, and 2017 Honda CR-V. Honda did not mention if wireless CarPlay will be supported.

The 2017 Honda Pilot goes on sale beginning November 7, with a suggested starting price of $33,030 for the CarPlay-supported EX model.

CarPlay is available in over 100 vehicle models worldwide from over two dozen automakers, providing hands-free or eyes-free access to common iPhone apps such as Maps, Messages, Music, Phone, and Podcasts, and select third-party apps. Apple keeps a periodically updated list of available models on its website.