Target has posted its Black Friday ad for 2016, listing several deals on Apple products. The promotions include 25% off all Apple TV models, $150 off the 9.7-inch iPad Pro and $180 off the Beats Solo2 Wireless. 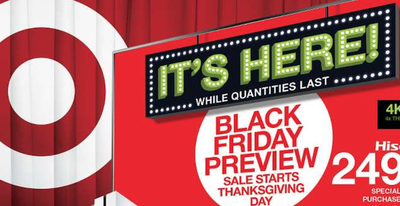 The retailer is offering discounts and promotions in two waves: there’s an Early Access period that begins today and runs until November 24 both in-store and online. Then, on Thanksgiving Day at 6 P.M., Target will open its stores for further Black Friday deals.

Regular Black Friday deals include $71.99 off Apple Watch Series 1, iPad discounts and iPhone 7 and 7 Plus deals.

In addition to discounts on Apple and Beats products, Target is offering 40% off all Otterbox Commuter cases.