In this chapter, we are going to discuss about the following parameters –

Now, let us learn them in detail.

According to the standard definition, âThe rate of repetition of a wave over a particular period of time, is called as frequency.â

Simply, frequency refers to the process of how often an event occurs. A periodic wave repeats itself after every âT` seconds (time period). Frequency of periodic wave is nothing but the reciprocal of time period (T).

Mathematically, it is written as shown below.

The unit of frequency is Hertz, abbreviated as Hz. 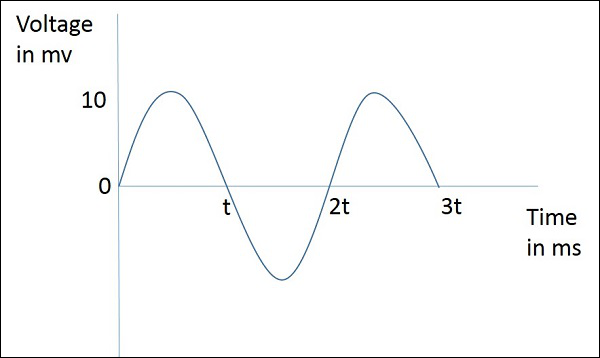 The figure given above represents a sine wave, which is plotted here for Voltage in millivolts against time in milliseconds. This wave repeats after every 2t milliseconds. So, time period, T=2t milliseconds and frequency, $f = \frac{1}{2T}KHz$

The following figure shows a periodic waveform. The wavelength (Î») and amplitude are denoted in the figure. The higher the frequency, the lesser will be the wavelength and vice versa.

The formula for wavelength is,

The wavelength Î» is expressed in the units of length such as meters, feet or inches. The commonly used term is meters.

The unit of impedance (Z) is Ohms.

According to the standard definition, âThe ratio of the maximum voltage to the minimum voltage in a standing wave is known as Voltage Standing Wave Ratio.â

If the impedance of the antenna, the transmission line and the circuitry do not match with each other, then the power will not be radiated effectively. Instead, some of the power is reflected back.

The key features are –

According to the standard definition, âA band of frequencies in a wavelength, specified for the particular communication, is known as bandwidth.â

The bandwidth, which we just discussed can also be called as Absolute Bandwidth.

According to the standard definition, âThe ratio of absolute bandwidth to the center frequency of that bandwidth can be termed as percentage bandwidth.â

The particular frequency within a frequency band, at which the signal strength is maximum, is called as resonant frequency. It is also called as center frequency (fC) of the band.

The Percentage bandwidth is calculated to know how much frequency variation either a component or a system can handle.

The higher the percentage bandwidth, the wider will be the bandwidth of the channel.

Radiation emitted from an antenna which is more intense in a particular direction, indicates the maximum intensity of that antenna. The emission of radiation to a maximum possible extent is nothing but the radiation intensity.

Radiation Intensity is obtained by multiplying the power radiated with the square of the radial distance.

The above equation denotes the radiation intensity of an antenna. The function of radial distance is also indicated as Î¦.