Biasing is the process of providing DC voltage which helps in the functioning of the circuit. A transistor is based in order to make the emitter base junction forward biased and collector base junction reverse biased, so that it maintains in active region, to work as an amplifier.

In the previous chapter, we explained how a transistor acts as a good amplifier, if both the input and output sections are biased.

The proper flow of zero signal collector current and the maintenance of proper collectoremitter voltage during the passage of signal is known as Transistor Biasing. The circuit which provides transistor biasing is called as Biasing Circuit.

If a signal of very small voltage is given to the input of BJT, it cannot be amplified. Because, for a BJT, to amplify a signal, two conditions have to be met.

If appropriate DC voltages and currents are given through BJT by external sources, so that BJT operates in active region and superimpose the AC signals to be amplified, then this problem can be avoided. The given DC voltage and currents are so chosen that the transistor remains in active region for entire input AC cycle. Hence DC biasing is needed.

The below figure shows a transistor amplifier that is provided with DC biasing on both input and output circuits. 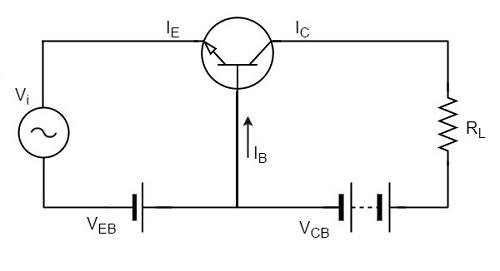 For a transistor to be operated as a faithful amplifier, the operating point should be stabilized. Let us have a look at the factors that affect the stabilization of operating point.

As temperature increases, the values of ICE, Î², VBE gets affected.

The process of making the operating point independent of temperature changes or variations in transistor parameters is known as Stabilization.

Stabilization of the operating point has to be achieved due to the following reasons.

Let us understand these concepts in detail.

As the expression for collector current IC is

The collector leakage current ICBO is greatly influenced by temperature variations. To come out of this, the biasing conditions are set so that zero signal collector current IC = 1 mA. Therefore, the operating point needs to be stabilized i.e. it is necessary to keep IC constant.

As the expression for collector current IC is

The self-destruction of such an unstabilized transistor is known as Thermal run away.

In order to avoid thermal runaway and the destruction of transistor, it is necessary to stabilize the operating point, i.e., to keep IC constant.

It is understood that IC should be kept constant in spite of variations of ICBO or ICO. The extent to which a biasing circuit is successful in maintaining this is measured by Stability factor. It denoted by S.

By definition, the rate of change of collector current IC with respect to the collector leakage current ICO at constant Î² and IB is called Stability factor.

The general expression of stability factor for a CE configuration can be obtained as under.

Differentiating above expression with respect to IC, we get